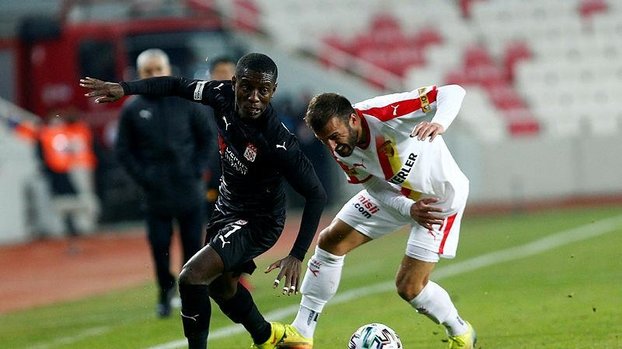 The 10th week of the Super League ended with two matches played today.

He faced Göztepe in Sivasspor field in the important match of the day. The tough fight resulted in a 1-0 advantage of the visiting team.

After this result, Göztepe got 14 points and Sivasspor got 9 points.

Next week, Sivasspor will face Trabzonspor on the road.

Göztepe will host Kayserispor on its field.

In the 16th minute, in the Göztepe attack, the ball went auta from the top in the shot of Guilherme with his left foot from outside the penalty area.

Moving from the left for Göztepe in the 17th minute, Berkan turned the ball inside from the last line. Murat hit the ball, which exceeded the defense, in the back pole, and the leather went auta round the side.

In the 19th minute, Kayode moved from the left, Claudemir hit the ball, which he turned over the line into the penalty area, and the ball hit the defense, hit the crown.

In the 28th minute, Kayode headed the ball that Robin Yalçın centered on the right-wing penalty area, goalkeeper İrfan Can lying down and controlled the ball.

In the 29th minute, moving from the left wing, Halil cut off while entering the penalty area, and the ball went sideways at the kick of Guilherme on the front pole.

In the 68th minute, Halil, who moved well from the right wing, turned the ball from the ground as he landed on the last line, and no one could touch the leather circle that passed the defense and the goalkeeper.

In the 80th minute of the Göztepe attack, Halil, who was empty, touched the head and the ball met with the net: 0-1.

Gradel took the free kick from the left in the 90 + 4th minute. Appindagoye’s touch remained in the goalkeeper in the penalty area.

The match ended with the 1-0 advantage of the guest team Göztepe.