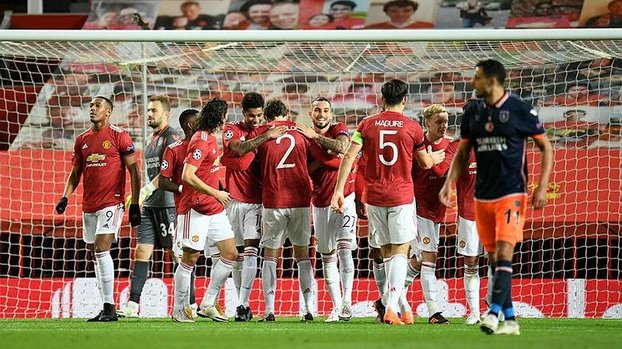 In the 4th week match of the UEFA Champions League, our representative Medipol Başakşehir faced Manchester United on the road.

The tough fight at Old Trafford resulted in the home team’s lead 4-1.

Goals that brought the victory to Manchester United; He came from Bruno Fernandes (2), Marcus Rashford (pen.) And James.

Deniz Türüç recorded the only issue of our representative Medipol Başakşehir.

The German representative will host Leipzig in the 5th match of Başakşehir Champions League.

At Manchester United, the French representative will host PSG.

CHADLI IS IN TOP 11 FOR THE FIRST TIME

Medipol Başakşehir’s Belgian player Nacer Chadli started a match in the first 11 for the first time in the orange-navy team.

Chadli, who survived his injury and entered the game after Medipol Başakşehir played against Gençlerbirliği and Beşiktaş in the Super League, was in the top 11 for the first time.

Manchester United started the match on the field with 5 changes in the first 11 of the game they lost in Istanbul.

Alex Telles, who also played in Galatasaray for a while, was in the top 11 against Medipol Başakşehir.

In the 7th minute, the ball bounced off the defense in the corner kick used by Manchester United, and was ahead of Fernandes outside the penalty area. Fernandes’s kick to the arrival of the ball met with the nets: 1-0.

In the 12th minute, Rashford sent the ball to the net, but the goal was voided due to offside grounds.

In the 17th minute, Berkay Özcan grabbed the ball and got out of his opponents and entered the penalty area. With the intervention of the defense with Berkay’s ball, the ball remained in front of Visca, while Visca’s hit went auta.

In the 19th minute, Manchester United increased the difference to 2. In the middle of Telles from the left wing, Fernandes sent the ball to empty nets as a result of Mert Günok’s mistake: 2-0.

In the 33rd minute, Manchester United won a penalty after Bolingoli’s intervention against Rashford.

Rashford, who was in charge of the ball in the 35th minute, sent the leather ball to the nets: 3-0.

In the 38th minute, in the free kick used by Istanbul Başakşehir, Demba Ba could not hit the ball as he wanted and the ball went auta.

In the 43rd minute, Bolingoli met the ball on the left wing with the pass of Deniz Türüç and entered the penalty area. On Bolingoli’s pass, Ba’s shot over the underpass hit the defense and went to the corner.

The first half ended with the home team’s 3-0 lead.

In the 50th minute, De Gea kicked Visca’s hard hit from outside the penalty area.

In the 70th minute, Greenwood met the ball inside the penalty area and pulled the leather ball to his left foot and hit him, the defense intervened at the last minute.

In the 75th minute, in the free kick by Istanbul Başakşehir, De Gea took the kick of Deniz Türüç, who was on the ball. The referee decided that the ball had crossed the line and counted the goal: 3-1.

In the 80th minute, Visca’s hard hit from outside the penalty area returned from the upper pole.

Meeting with the ball in the penalty area with Mahmut Tekdemir’s pass in the 87th minute, Visca’s kick remained at De Gea.

In the 90 + 2nd minute, Istanbul Başakşehir was looking for goals in all its lines in the future, Manchester United, who took advantage of the space behind, increased the difference to 3 again with James’s goal: 4-1.

In the remainder of the match, there were no more goals, and the match ended in Manchester United’s 4-1 win.