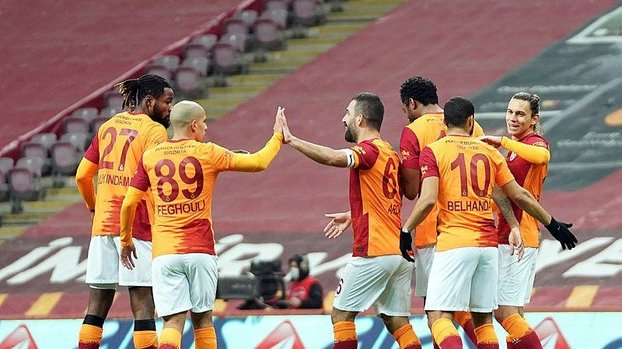 Galatasaray will face Konyaspor on the road in the 17th week of the Super League. After Omar’s unfortunate accident last week, they drew against Antalyaspor and left the leadership, and the yellow-red team plans to heal their wounds today. However, there are important shortcomings in Galatasaray before this tough match. Emre Kılınç will not be on the field due to the red card, Marcao and Arda Turan due to the yellow card penalty. Sofiane Feghouli, Karo Etebo and Radamel Falcao are still injured.

4 MATCH PENALTIES END
Fatih Terim, who rolled up his sleeves after the Antalyaspor match, had a meeting with the team yesterday. Noting that they need to open a new page despite everything, the experienced coach said, “We are going through a troubled period. We are all very depressed, but on the one hand we have to do our job. A troubled match awaits us. We only need to concentrate on this game and take back the leadership we lost”. In the meantime, Terim, whose penalty was reduced to 4 matches, will be in the stands for the last time today.

39th APPOINTMENT IN SUPER LEAGUE
Konyaspor and Galatasaray have faced 38 times in the history of the league so far. While the yellow-reds won the field 28 times in the aforementioned competitions, the green and white people defeated their opponent twice. In the remaining 8 matches, there was no winning side. While the match played between the two teams in Istanbul last season ended with a 1-1 equality, Galatasaray won the match in Konya with a score of 3-0.

THE CAPTAIN TEAM WAS NOT JUST LEFT
Captain Arda Turan, who will not be able to take part in Konyaspor away due to the yellow card penalty, was also in the delegation. It was stated that the successful football player met Terim and said that he wanted to be with his friends and his teacher was very pleased with this request. Meanwhile, Ryan Babel, who survived the coronavirus, was also included in the cast.

A LOT OF MISSING IN KONYA
Like Galatasaray, Konyaspor will not be able to take the field with its ace squad. On the Yeşilbeyazlı team, Ömer Ali Şahiner, who is still injured, will be on the field without Miya, Alper, Adil, Anicic, Volkan, Hurdato and Edouk. Meanwhile, a contract is expected to be signed today with the right wing player Zymer Bytyqi, with whom Konya has reached an agreement.

CLOSED ITS CASTLE
Galatasaray has aired the opponent nets 25 times in 15 matches in the Super League this season. He saw 10 goals in the yellow-red castle. Aslan, with this performance, is the team that conceded the least goals in 21 teams.

TAYLAN AFFECTED VERY CLEARLY
A very clear statistic has emerged showing how Taylan’s absence from the Antalyaspor match stopped Galatasaray. While playing at Taylan 11 in the match where Cimbom beat Trabzon, he made a pass connection with Belhanda (13), Omar (9), Ömer (7) and Saracchi (7) to bring the team to the front. However, Donk, who played in Taylan’s absence, chose Luyindama (13), Marcao (11), Linnes (11) and Belhanda (8). He made his rust connections not in the front, but back. Taylan, who will be on the court again, is expected to turn the direction of the midfield forward.

LAST CHANCE FOR DIAGNE
Although Oğulcan played in forward in Antalyaspor match, the young footballer remained away from the goal paths due to the fact that he did not have a real position. While many balls thrown in front of the goal were left unattended, eyes turned to be serving in the forward today. It was learned that Terim was considering giving Diagne another chance, which he did not recruit last week. If there is no change at the last minute today, Diagne will get his shirt after 2 matches.

THREE FOOTBALLS ON THE LIMIT
Before the Konyaspor competition, Galatasaray also has 3 players on the penalty line. Christian Luyindama, Younes Belhanda and Ömer Bayram will be suspended in the match against Gençlerbirliği if they receive a yellow card. Taylan Antalyalı, who could not play in the Antalyaspor match due to his penalty, will be able to take his place in the team.

15
Galatasaray played 7 away games in the Super League this season. In these competitions, yellow-reds won 5 wins and lost 2 times. Cimbom, which collected 15 points, compared to previous seasons, is away.

27 THE MATCH IS NOT BEING
Galatasaray has not been defeated by Konyaspor in 27 games in the league. Yellow-Kırmızılılar scored their last defeat against Konya on September 13, 2003 on the road with a score of 1-0. In these 27 matches, Aslan won 20 times and drew 7 times.