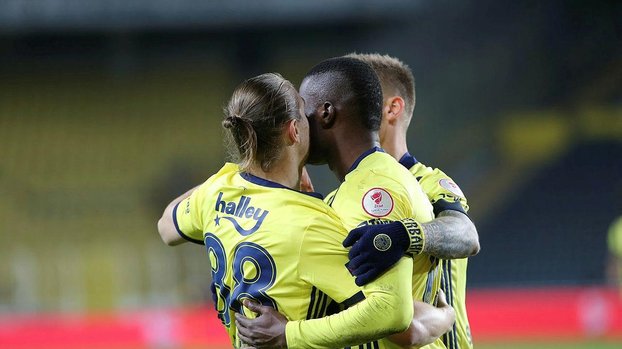 Ziraat Turkey Cup excitement continues. Fenerbahçe and Kasımpaşa shared their trump card in the last 16 rounds. Winning the tough match 1-0 in Kadıköy Ülker Stadium, the yellow-dark blue team reached the quarterfinals. Mbwana Samatta scored the goal that brought the victory to Canary in the 51st minute.

MERT HAKAN GIRLED IN 90!
In Fenerbahçe, Mert Hakan fell to the ground in the 90th minute after an air ball fight with Aytaç Kara. The 26-year-old football player directly saw a red card after interfering with his opponent while on the ground.

GOALS AFTER 104 DAYS IN SAMAT!
Kasimpasa played with Fenerbahce Turkey Cup last 16 round match in yellow and dark blue in the striker Mbwana Samata, shook the nets after 104 days. In the 51st minute of the match, the Tanzanian striker, who met with the ball in the penalty area in the free kick used by Caner from the right, recorded the goal that put his team ahead 1-0 with a head kick. Samatta scored 2 goals in the Fatih Karagümrük struggle played in the 4th week of the Super League, but could not score in the next 5 weeks. While the 28-year-old football player stayed away from the fields for 34 days due to a knee injury, he could not play in 7 games.

Tanzanian players, returning to the field in the Super League week 16 match Kasimpasa, noted across the 104 days after the first goal struggle in Turkey Cup Kasimpasa. Samatta gave its place to Ozan Tufan in the 69th minute of the match.

HARUN TEKİN FOR THE FIRST TIME IN THIS SEASON
Fenerbahçe goalkeeper Harun Tekin took part in an official match for the first time this season. Harun Tekin, who took part in the preparatory match played by the yellow-blue team against Fatih Karagümrük on November 15 and whose cheekbone was broken, took the field for the first time in an official match this season. Harun, who was operated after his injury and missed the matches between Sivas Belediyespor and Karacabey Belediyespor in the cup, took part in the Kasimpasa match.

MINUTES OF THE MATCH
In the 16th minute, Hodzic, who rose to the ball in the free kick used by Yusuf Erdogan, hit the ball and the ball went auta from the side.

In the 24th minute, Mert Hakan Yandaş hung up behind the defense and transferred his pass to Sinan Gümüş in the single. At Sinan Gümüş’s kick, the defense intervened and the ball hit the corner.

In the 29th minute, Thelin rose to the ball that Hadergjonaj cut into from the right wing, and Harun Tekin intervened at the last minute.

In the 40th minute, Hodzic entered the penalty area and made a shot with a mixture of shot and pass, Thelin tried to touch the ball but was not successful.

In the 45th minute, as soon as Aytaç Kara entered the penalty area, the kick went out.

The first half ended with a goalless equality.

Meeting with the ball on Hodzic’s pass in the 46th minute, Yusuf Erdogan’s shot from the left diagonal inside the penalty area went auta with the intervention of goalkeeper Harun.

Samatta, who rose to the ball in the front pole in the free kick used by Caner in the 51st minute, shook the nets with his head kick: 1-0.

In the 60th minute, Thelin could not hit the hard ball he wanted and goalkeeper Harun Tekin ced the ball.

In the 61st minute, in the corner kick used by Yusuf Erdogan, Luckassen hit the head and sent the defensive ball to the corner.

Alan, who found the ball bouncing off the defense in the 87th minute in front of the penalty area, gave a hard hit, but the ball came out from the side of the castle.

Meeting with the ball in the penalty area in the 89th minute, Cisse hit the ball after pulling the ball, and the ball hitting the defense went to the corner.

Mert Hakan Yandaş, who remained on the ground after a foul in the 90th minute, was out of the game with a direct red card due to his action after getting angry with his opponent.