Trabzonspor continued its preparations for the away game against Hes Kablo Kayserispor on Saturday, December 12, in the 12th week of the Super League.
Under the direction of coach Abdullah Avcı, the first 30 minutes of training was held open to press members at Mehmet Ali Yılmaz Facilities. Nigerian player Anthony Nwakaeme with muscle strain on the back muscle of the right thigh, Djaniny Saemedo, who was found to have difficulty in the right groin muscle, and Stiven Plaza, who was injured in the left back muscle, did not participate in the training. After the warm-up movements in the open part of the training, rust work was done in the narrow area.

T-SHIRT REACTION TO RACISM
Burgundy-blue players, in the UEFA Champions League match against Paris Saint-Germain, in response to the racist rhetoric of Romanian fourth referee Sebastian Coltescu against Başakşehir Assistant Coach Pierre Webo, written “No to Racism” in English. He went out on the field wearing T-shirts and posed for the press.

Burgundy-blues will go to Kayseri by private plane after completing their preparations with their training tomorrow. 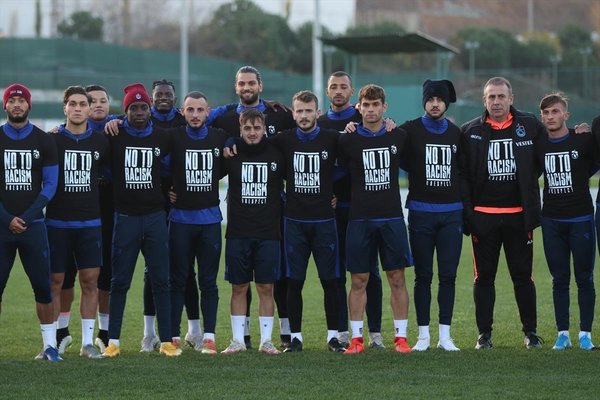 Gesture from PSG chairman to Webo