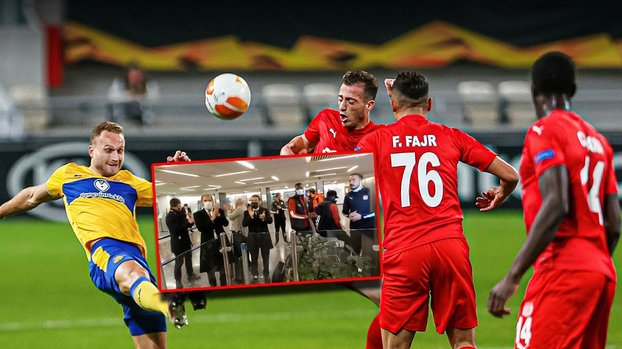 Israeli Foreign Ministry Spokesperson Lior Haitat previously said that the Sivasspor group was held at Ben Gurion airport in Tel Aviv due to the late arrival of the flight time. Haitat, “Sivasspor convoy was held in Tel Aviv because it was late to the flight time. The plane will take off at 5:30 (6:30).” he said.

Haitat answered the question of why the plane would be kept until this hour as “No flights are made at the airport between 1 and 5 am due to noise at night”.

The Sivasspor Club, on the other hand, stated that the claims of Lior Haitat, the Spokesperson of the Israeli Ministry of Foreign Affairs, that the Sivasspor group arrived late at the flight time and that it was held at the Ben Gurion airport in Tel Aviv did not reflect the truth.

The Demir Group Sivasspor group, which faced Maccabi Tel-Aviv on the road in the 6th and last week of the UEFA Europa League I Group, was stuck at the airport on their way back to Sivas from Israel.

In a statement made on the social media account of the red-and-white club, “Our delegation, preparing to return to Sivas after the Maccabi Tel-Aviv match, was stranded at the airport. Israeli officials are removing all kinds of difficulties to our party by closing the system and crossings. statements were used.

Sivasspor Club President Mecnun Otyakmaz, who is still on the plane with the convoy, said, “It is a great disgrace. We came from the stadium very early and quickly, saying ‘Let the plane take off early’. We have been stuck here for 2 hours.”