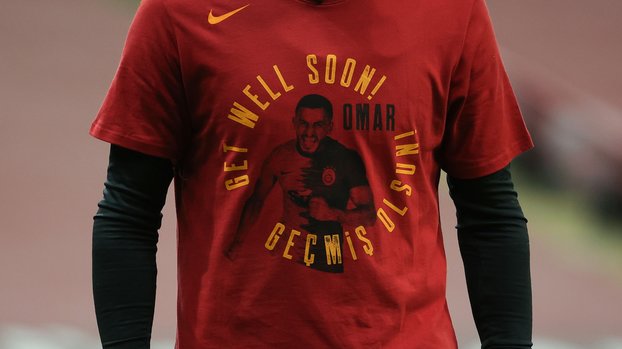 Players from Galatasaray and Antalyaspor went out with special t-shirts for Omar Elabdellaoui to warm up before the match. During the New Year’s Eve, the players wore T-shirts with the words “get well Omar” for the Norwegian footballer, whose fireworks exploded and had been treated in the hospital for 2 days.

No Feghouli and Taylan from Antalya

Fatih Öztürk, Şener Özbayraklı, Radamel Falcao, Kerem Aktürkoğlu, Emre Akbaba, Emre Taşdemir, Emin Bayram, Bartuğ Elmaz, Jesse Sekidika and Ali Yavuz Kol took part in the yellow-red team’s bench. Coach Terim had to make 3 changes in the first 11 of the match, where they won 2-0 away in the 15th week. The experienced technical man could not benefit from Omar Elabdellaoui, Sofiane Feghouli and Taylan Antalyalı, whom he served in the top 11 against the Black Sea representative.

Ryan Donk, who has long been considered in the center of Galatasaray, struggled in the midfield. Taylan Antalyalı, who performed one of the remarkable performances of the season, could not play against the Mediterranean representative due to the yellow card penalty. Fatih Terim also withdrew the Dutch football player, who also served in the midfield in his career, to replace Taylan. Luyindama took the vacant place in the stopper from Donk.

Podolski: I’m starting the new year with a special match

Fraport TAV Antalyaspor fans criticized Podolski’s post. In the comments of the fans, there were expressions such as “Stay in Istanbul, you do not deserve Antalya”.

“Will you say ‘stop’ to this disgrace?”

Fraport TAV Antayaspor’s fan group representatives also reacted to the star footballer on social media. 07 Youth fan group “There is something more important to us than 3 points. Character. Will you say ‘stop’ to this disgrace?” replied to Podolski by sharing.